Getting my hands dirty with some bog-standard games design couldn’t have come at a better time! The NFTS Games Jam (first of it’s kind) marks the start of the festive Christmas period. Much of December whizzed past due to the Moments of Consequence project and it’s only now I can recover a spare thought for another Unity project!

The rules for the games jam appear nice and liberal : simply make a game over a 5 day period from 18th Dec 14′ – 4th Jan 15‘. Make it GENERIC, and make it so that you learn something you didn’t know before.

Well as soon as I heard this it was straight to the bargain bin of my games nostalgia to look for a game so generic it would be a war crime to try and make yet another version of it. Admittedly I could have ended up making a FPS (TimeSplitters, Goldeneye, and Halo call up some fond memories). Maybe I could have learned something from these great obelisks of the past. But I went with these classic memories of old instead…

Oh yes, the original EA FIFA game from 1994, who could forget the isometric joy of passing a ball that could be barely distinguished from the background. Great celebrations, and there’s stars around the players! Aw.

Then there was Ronaldo V Football, remarkable not only for it’s dogged dedication to making Ronaldo the centre of the universe, but also this too-catchy tune that is forever samba-ing in my head… 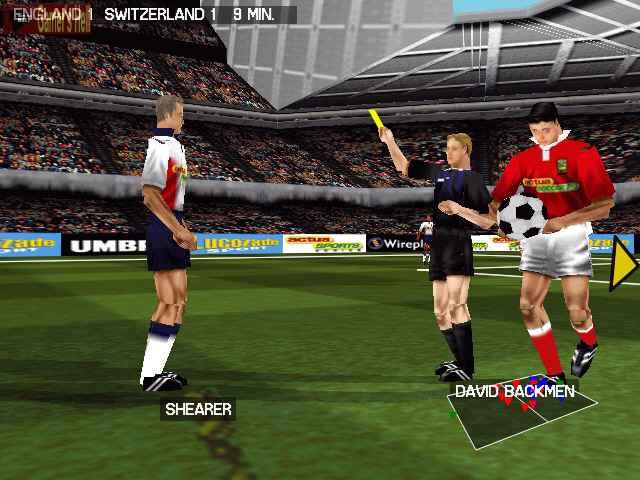 And who wouldn’t be fooled by Actua Soccer’s attempt at realistic player-on-player animated sequences, such as these meatbags trying to square up to the man who his place on the front of the disc box, Alan Shearer!? His posture and high definition stare says it all really.

To clarify something…. I have always found football games outside of the realm of my interests because my brother was so addicted to the sport. His passion was my annoyance for a while as I was relegated to precarious goalkeeping in school matches during our youngest years. But the games had a truly strong design and flavour that it was hard not to get sucked into them. Picking up these games was fun and frantic, and always revolved around (not Ronaldo but) local multiplayer antics. The rich seam of fandom was a glossy coat to a me, and a game-changer for my obsessed little tyke of a sibling. For a time it would suit the two brothers to play and play and play, blood guts and grit in every last shot on goal.
Then suddenly, as if a lightening bolt had struck the very core of the sportsgames market, it came to be that micromanaging every last aspect of your team and the way it’s run became the new killer-feature. Football Manager and other tinker-games had been infiltrating the fun for years. Finally those aspects of tactical replacement and multidimensional resource management moved to the forefront of sports games; an acknowledgement of the extreme level of strategy and mastery at the heart of the sport maybe…
Well if I’ve learned anything about football fanatics from working in pubs and bars, it’s that they are hooked on conjecture and facts. What better arena to prove themselves and their mass accumulation of knowledge than that of a hyper-real simulation? So it came to be that the endless stream of FIFAs and Pro Evos come out every year to haunt the shelves of soccerfans everywhere for decades to come, each more perishable than the last. I lost my faith in the format fast.
So I want to return to the days of a less complicated sort of football game. The personal challenge comes not only from my out-of-date understanding of football (hopefully nothing much has changed in 9 years to affect the mechanics!) but also creating a fun experience with a physics system in Unity. Convinced this would be enough to spur me on, I accepted the self-made mission just hours ago. [EDIT: this has since changed!! Read new posts]
Operation SOCCOBAN is underway!
Not sure quite yet how it will be tackled, most likely I’ll try to build a rapid prototype to get the basic actions (passing, dribbling, tackling, shooting, saving etc) up and running.
I’ll be posting up code, GIF videos and snapshots showing my progress asap. Wish me look sportsfans! 😀