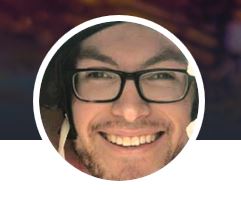 Suddenly…
A Video Games Developer Approaches You!
"Visitor, what will you do?"
Discover the human's quest

I hope to pave the way for experimental experiences that have narrative, community and grace at their heart.
Through the lens of play and games, my goal is to:

Find out the stranger's credentials
Locations

Pluck up the courage to ask why he makes games [Bravery]

A discarded Atari ST (1996) and the trailblazing Oculus Rift of 2017 are the electronic totems that bookend my experience with video games. If I look further out from this timespan, I start to see something as old as human history: The feeling of picking up an analogue controller, a pack of cards, a pen and some paper, a stone to play catch with, are all connected by this observed phenomena: play. There is a good chance that 'play' may even be older than 'we' are. My own case reveals that I've been telling stories, humming tunes, playing games, wandering through fields, ducking down alleyways, playing the fool, lending an ear, and reading good books and obscure comics my whole life. All the while exploring play. I am left with the feeling of a life lived well, so far.

With time, a distinct hunger for 'what's next' has developed within me. One that drives me to explore infusions of cross-cultural and pan-decade delicacies. It is something that guides me when I try to make ethical decisions about how I behave as a consumer, or how to talk to someone about difficult issues like poverty, violence and prejudice. It is something that excites me as my mind is able to picture the growing networks of inspired communities across the globe, some newly digitised, and others old as the mountains. Weaved into this, I believe that playing games, building games, and bringing people together around games is essential to maintain open and active dialogue in our modern world. I've arrived to these thoughts after sharing space with others that play, and I think many other people do too.

I see the video games industry as both marvellously succeeding, and spectacularly failing. After 4 years actively engaged in the industry I am encouraged by the experimental work of the indie scene, the flourishing of crowdfunded projects, and the interdisciplinary acts of collaboration between creatives and formal establishments. We are all really interested in telling great stories and experiencing compelling gameplay. Let's contine to champion these goals.

Yet I see the games industry as severely hampered by our younger-year mentality, issues of representation and outreach, fear of judgement, and reliance on outdated financial structures. This last point relates to a much broader discontent I have with 'money' in general, which I believe acts as an insufficent replacement of local community support, security and resilience. I believe the games industry is by-in-large neglecting to address the relationship between these important issues. I want to give people an opportunity to openly discuss such topics.

Encourage him to read some poetry [Persuasion]

Hey.
Thanks for being here.
So my name, to
Be clear
Is Kai McGilligan Oliver.

It is a name that often gets me
Into all sorts of trouble with
Debit cards (not big enough to hold
A lengthy name) And university
Library systems, I mean, comeon,
A double surname sans hyphen?
What gives!?

It is also a name that represents
A gathering of experiences
And events over twenty seven
Years previous, many of which have
Given wicked insights into
Some things...

Nomadic freedom of the open road.
Power of narrative to heal our friends
And help strangers. And the primordial
Quintessence of playing, thus mastery,
Thus pattern recognition. Much can be
Solved through love and communication.
And so...

This ongoing 'human project' is me.
Time to humbly report back on what
I have learned. What I have burned. And what you
May spot as the pot is churned.

Thanks for being here.

Or come visit me in North London for a cheery brew. Loading Bar is pretty close to where I live 🙂